When Indiana workers are injured on the job, they hire Hewins Law Firm to help with their worker’s comp cases for a variety of reasons.  A big reason is worker’s comp adjusters ignoring their files.  We get tons of calls from people who say something like “I keep trying, but the worker’s comp adjuster won’t return phone calls!”  This can lead to unimaginable frustration and problems, including unpaid temporary total disability (TTD) benefits, untimely resolution of cases, unpaid medical bills, and perhaps worst of all, delays in receiving medical care.  So, what can you do if worker’s comp won’t return calls?  It turns out there are a few options available to you.

One way to get an adjuster’s attention is to hire a worker’s compensation attorney.  Just to let you in on a little secret:  sometimes they ignore us too!  The difference, however, is that we understand worker’s comp law better than the adjusters do, and we know how they can be held accountable.  The Indiana Worker’s Compensation Act has a provision in it that holds employers, their insurance companies, and adjusters to high standards when handling a worker’s comp claim.  Failure to live up to those standards can lead to a judgment against one or all of them for bad faith or lack of diligence.  While not every unreturned phone call or late TTD check leads to that kind of judgment, a pattern of misbehavior can.  Adjusters know that when an injured worker has a lawyer, the risk of being held liable for bad faith or lack of diligence goes up.

Another thing an attorney can do is file an Application for Adjustment of Claim.  This is like filing a lawsuit in court, except the Indiana Worker’s Compensation Board has its own judges who resolve disputes.  By filing an Application for Adjustment of Claim, a lawyer usually gets involved on behalf of the worker’s comp insurance company.  In our experience at Hewins Law Firm, insurance company lawyers are MUCH more attentive to issues our firm brings to their attention.

You do not have to hire an attorney just because you have a worker’s comp case, but we find this is the best way to keep adjusters honest.

Communicate via E-mail, Letters or Even Fax

If you’ve got a worker’s compensation injury and your insurance adjuster isn’t returning your phone calls, make sure all future communications are in writing.  When you get injured on the job and the worker’s comp insurance company is notified, the adjuster assigned to handle the claim will frequently mail you an introductory letter.  That letter will most certainly have a mailing address, but may also include an e-mail address or fax number.  Use those methods of communication!  When you make phone calls and leave messages, the adjuster may claim to have no record of those phone calls.  But if you send e-mails, write letters, or even send faxes, you will be able to prove in the future that you made multiple efforts to reach out.

If you do have to call the adjuster and it’s ignored after a few efforts, find a way to speak with the adjuster’s supervisor.  That doesn’t always work, but even insurance adjusters bristle when their bosses start breathing down their necks.

All work injuries must be reported to the Indiana Worker’s Compensation Board.  This means the Board will have a record of your injury and the insurance company involved.  If the adjuster won’t return your phone calls, consider contacting the Board to let them know what’s going on.  The Board has people whose job is to try to facilitate communication between injured workers and the insurance companies.  If you do contact the Board though, be ready to document your efforts – which is why written communications can be key!

You may be able to start the process by simply calling the Indiana Worker’s Compensation Board.  Currently, their phone number is (800) 824-2667, but head over to their website in case that’s changed by the time you read this.  The Board may ask you to fill out a document called a Request for Assistance.  As you can see from the photo below, it’s a simple form:  just give your information, your employer’s information, the insurance company’s information, and explain that your phone calls aren’t being returned, giving examples. 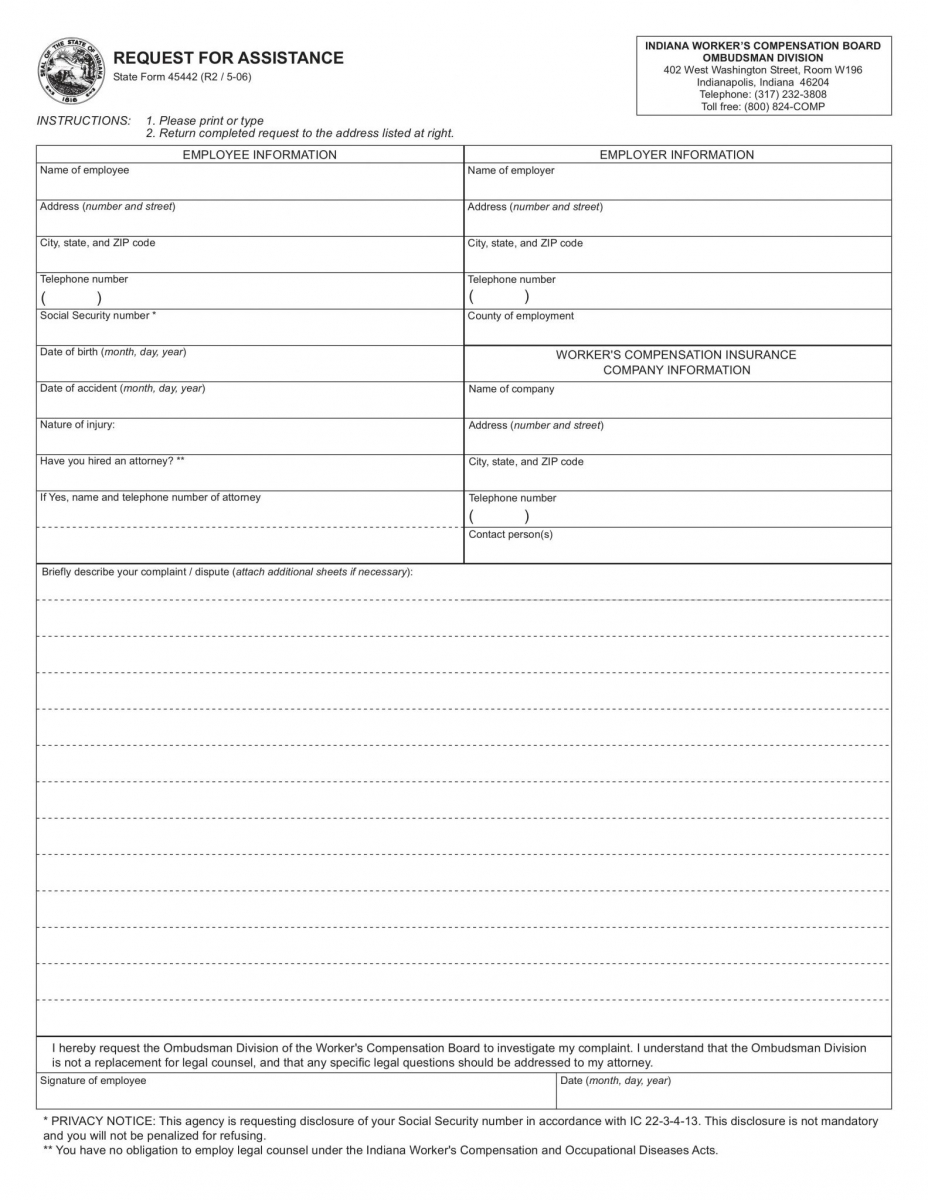 Worker’s Comp cases are different than ordinary personal injury cases.  In worker’s comp, there are often urgent needs that must be addressed quickly, and when the insurance company responsible to address those needs won’t return phone calls, it can have devastating effects on injured workers.  That’s why, no matter which method above you try, you simply must hold the insurance company accountable to do the right thing.  The more you let them get away with ignoring the files, the more they’ll do it.  So, by holding them accountable, you’ll not only be helping yourself, but you’ll also be helping future Indiana injured workers.

Contact us now for a free evaluation! We will review your case

WE PUT OUR
CLIENTS FIRST,
ALWAYS